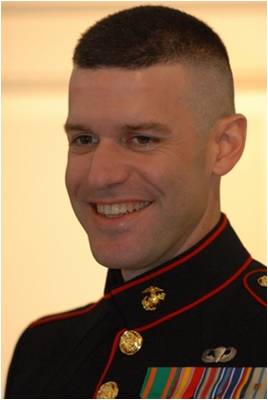 William John Cahir was born December 20, 1968, in State College, Pennsylvania.  Bill graduated from Pennsylvania State University with a Bachelor of Arts in English. He enlisted in the Marine Corps in October 2003 and attended Marine Corps recruit training at Parris Island, South Carolina. Upon completion of recruit training, Bill was assigned to the 4th CAG in Washington, DC.  In 2004 he deployed with a 4th CAG Detachment to Anbar Province and participated in combat operations in Ramadi and in Fallujah during the historic Al Fajr campaign in November 2004.  Bill attended the U.S. Army Parachutist Jump School at Fort Benning, Georgia and received his jump wings.  In August of 2006, Bill (callsign “Werewolf”) deployed to Fallujah, Iraq in support 1st Battalion, 24th Marines, Regimental Combat Teams 5 & 6.   He was instrumental in facilitating critical tribal engagements that contributed to the “Anbar Awakening” – the pacification of warring Sunni tribes and the expulsion of Al Qaeda.  In April of 2007, Bill was meritoriously promoted to the rank of Sergeant.  In a civilian capacity, Bill held several positions in journalism and as a U.S. congressional staff member.  He was also employed by Booze Allen and Hamilton as a senior associate.  Bill was one of the original architects of Leadership Under Fire.

In May of 2009, Bill deployed to Afghanistan with 4th CAG in support of the 2nd Marine Expeditionary Brigade.  He served as a CAG Team Chief for 1st Battalion, 5th Marines in the Helmand River Valley.  On August 13, 2009 Sergeant Bill “Werewolf” Cahir was killed in action against the enemy when he was struck by a sniper round.  He left behind his wife and two beautiful daughters who he never met.

Bill was laid to rest in Section 60 of the Arlington National Cemetery.