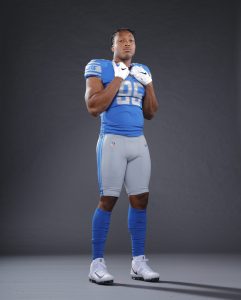 Romeo Okwara is a Defensive End for the NFL’s Detroit Lions. He played college football at Notre Dame and signed with the New York Giants as an undrafted free agent in 2016. Romeo immigrated to the United States from Nigeria with his family in 2005, and he played organized football for the first time a year later, but his lack of experience resulted in him being cut from the team. During his childhood, Romeo’s parents stressed the importance of education to him and his siblings so much so that during the recruiting process he would not entertain interest from colleges whose academic reputations did not meet his standards. In addition to being a professional football player Romeo is an avid photographer whose work has been featured in galleries by Leica. Romeo serves as a human performance advisor for Leadership Under Fire as well as the LUF Team photographer.