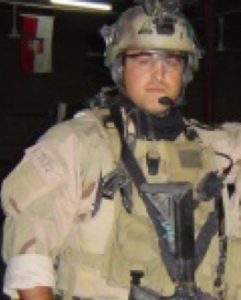 Justin Legg is a retired Navy SEAL Officer. He graduated from the U.S. Naval Academy in 2000 with a B.S. in Systems Engineering. He was a member of Basic Underwater Demolition / SEAL Training (BUD/S) Class 234 and became a plank owner of SEAL Team SEVEN. While with SEAL Team SEVEN he deployed to the Middle East twice and participated in combat operations in support of Operation Iraqi Freedom. After returning from Iraq, he transferred to Special Boat Team TWENTY-TWO in Mississippi, where he served as a Task Unit Commander and the Team Training Officer. In early 2006 Justin was diagnosed with a severe form of Leukemia. Over the next 10 years Justin endured over 75 treatments of chemotherapy and radiation, a bone marrow stem cell transplant, an immune disorder respiratory failure, a double-lung transplant.

While he was going through his medical adventures, LCDR Legg fought to stay on active duty performing various duties at Naval Special Warfare Group TWO and FOUR, SEAL Team TWO, and even rehabilitated himself well enough to become an operational SEAL Platoon Commander at SEAL Team EIGHT for a short while in between the transplants. Justin medically retired from the Navy in 2012. Justin became the first, and still the only, double lung-transplantee in the world to climb Denali in Alaska. Justin completed his master’s degree in International Relations from the Johns Hopkins School of Advanced International Studies (SAIS) in Washington D.C. H presently works as a Renewable Energy consultant for the Navy’s Resilient Energy Program.