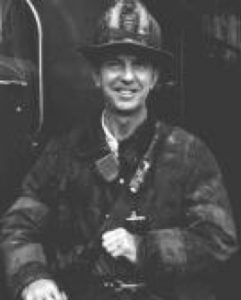 Captain John Vigiano, FDNY joined the ranks of the FDNY in 1962. He served as a firefighter in Ladder Co. 103, a Lieutenant in Rescue Co. #2 and the Captain of Ladder Co. 176. Captain Vigiano retired from the FDNY in 1998 with 36 years of service, all of it spent in the Boro of Brooklyn. A lifelong student of the job, he was instrumental in the development of many operational procedures for FDNY ladder and rescue companies. Captain Vigiano is a former Sergeant, USMC. Prior to his enlistment in the U.S. Marine Corps, he had enlisted in the New York National Guard at the age of fifteen. Both of Captain Vigiano’s sons (Joe – NYPD ESU and John – FDNY Ladder Co. 132) were killed in the line of duty at the World Trade Center on 9/11. He and his wife of 50 years, Jan, actively honored their sons’ sacrifice through tireless advocacy of our nation’s post-9/11 military veterans. Captain Vigiano served as the Principal Mentor for Leadership Under Fire until his passing.