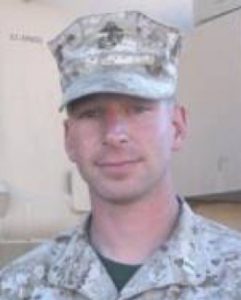 Lieutenant Colonel Andrew Terrell was commissioned as a Marine Corps officer in 2002. Upon completion of The Basic School and Infantry Officer’s Course he assigned to 1st Battalion, 5th Marines as a rifle platoon commander. Andrew has served six combat tours in areas of operations that include: Baghdad, Iraq; Fallujah, Iraq; Ramadi, Iraq; and Now Zad, Afghanistan. He was wounded during the first major battle in Fallujah in 2004 and has been awarded the Bronze Star with “V” device on three separate occasions.

Andrew also completed an exchange tour with the British Royal Marines and is a graduate of the British Royal Commando Course. He is a 2002 graduate of the Virginia Tech University and the USMC’s Expeditionary Warfare School. Andrew also served as the inspector-instructor with Charlie Company, 4th Recon Battalion, the Commanding Officer of USMC Recruiting Station Detroit and presently serves as the Current Operations Officer for 1st Marine Division. Andrew serves as an operational leadership advisor for Leadership Under Fire.